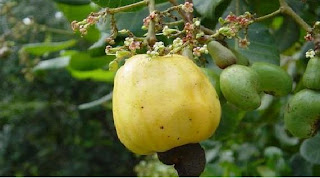 6th July 09: CASHEW NUTS
Cashew tree is very rare to be found and is mostly found around Kelantan , Trengganu, and sea coast areas. In India, cashew trees are cultivated in Kerala and are one of the main exporters of cashew nuts.
Cashew nuts are seeds taken from the fruit. Much is said about the seeds but very little is known about its fruit.Cashew fruit or also known as cashew apple is rich in vitamin c and iron. Sprinkle a pinch of salt over the apple before eating it as it gives taste to the fruit.
The young tender cashew leaves can also be consumed. The young leaves are suitable to be made chutney or “thuvaiyal”. The young shoots have properties to secrete milk, hormones and produce semen.
Pregnant women who have early morning sickness are advised to boil the tender leaves and consume the boiled water. The leaves are able to reduce pitta level in the body.